Winter is the perfect time to take up birding! It is as easy as setting up a bird feeder and watching from the comfort of our homes. Or head out for a walk to do some exploring! The great thing at this time of year is that it is less overwhelming to identify birds since there are not as many birds that stick out the winter with us!
So just what birds might you see? And how are they surviving the winter? 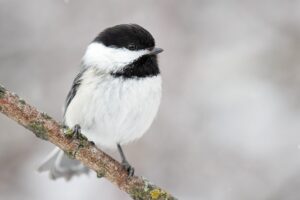 The Black-capped Chickadee hides seeds and other food items to eat later. Each item is placed in a different spot and the chickadee can remember thousands of hiding places.
They must eat enough food, high in fats to gain at least 10 percent of their body weight in a day. They do this so they have enough energy to make it through the night. They go into what is called regulated hypothermia which allows the bird to lower its normal body temperature to conserve energy. 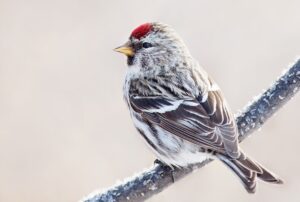 These small finches breed in the Arctic tundra and boreal forest.
Some studies show that in the winter, redpolls subsist almost entirely on a diet of birch seeds. During the winter, some Common Redpolls tunnel into the snow to stay warm during the night. Tunnels may be more than a foot long and 4 inches under the insulating snow. Redpolls have throat pouches for temporarily storing seeds. They may fill their pouches with seeds quickly then fly away to swallow the seeds in a more protected, warmer spot. 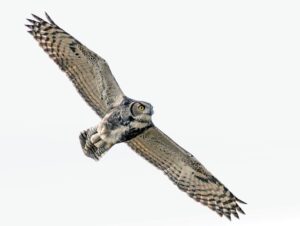 Great Horned Owls are covered in extremely soft feathers that insulate them against the cold weather and help them fly very quietly in pursuit of prey.
They are very early nesters, with egg laying and incubation underway well before the snow disappears!

During the winter, waxwings eat dried fruits. The higher sugar content of dried fruit means that waxwings frequently drink water and even eat snow to help with digestion.
Waxwings have red, waxy tips on some of their feathers and yellow tips on the tail. The colour comes from carotenoid pigments found in the fruit waxwings eat. 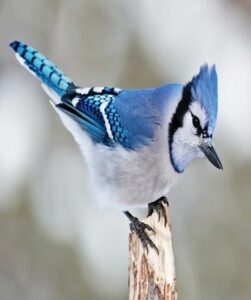 The pigment in Blue Jay feathers is melanin, which is brown. The blue colour is caused by scattering light through modified cells on the surface of the feather barbs.
The black bridle across the face, nape and throat varies extensively and may help Blue Jays recognize one another. 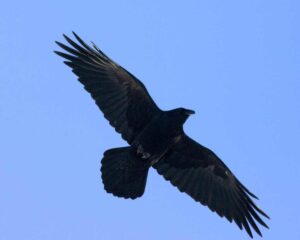 Breeding pairs of Common Ravens hold territories and try to exclude all other ravens throughout the year. In winter, young ravens finding a carcass will call other ravens to the prize. They do this to overwhelm the local territory owners by force of numbers to gain access to the food.
Ravens have specialized feathers on the nostril to keep in moisture, and the beak is adapted to break apart frozen food. 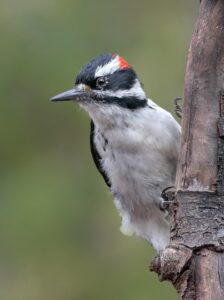 Male and female may maintain separate territories in early winter, pairing up in mid-winter, often with mate from previous years.
The Hairy Woodpecker looks very similar to the Downy Woodpecker. The bill size is a major difference. The Downy’s bill is dainty and about one third the length of the bird’s head. The Hairy’s bill is long, chisel-like and is about as long as the distance from the base of the bill to the back of the head. 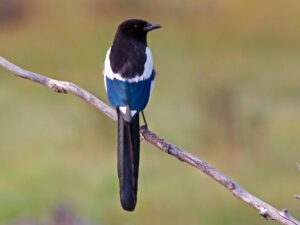 Carcasses make up most of a magpie’s diet in the winter. They are smart enough to know to follow predators like a coyote and scavenge from their kills.
The Black-billed Magpie frequently picks ticks from the backs of large mammals, such as deer and moose. The magpie eats the ticks or hides some for later. 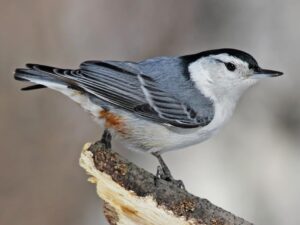 In winter, White-breasted Nuthatches join foraging flocks led by chickadees, partly because it makes food easier to find and also because more birds can keep an out for predators.
Nuthatches will cache food, storing it to eat later. They often store seeds, one at a time, under the loose bark of a tree.

Birding, like other outdoor activities, can be great from mental health! Spending time in nature can easy anxiety and provide an all-around mood boost!
The great thing is, the more we learn about birds, the more we can help protect them. Did you know that bird populations have dropped by nearly three billion across North America?
Here are seven things we can do that can help birds: